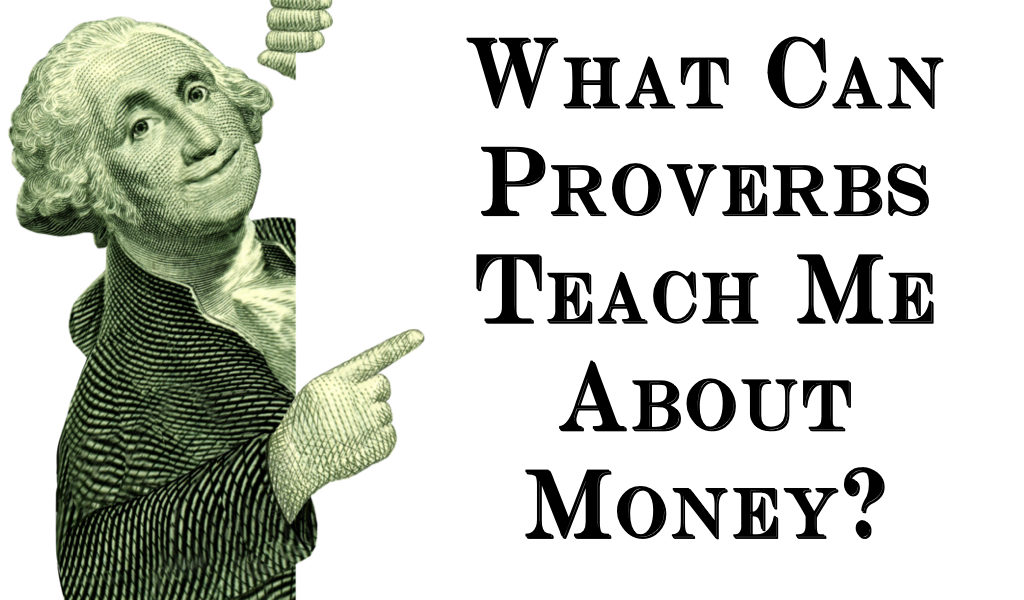 What Can Proverbs Say About My Money?

If you’re going to take financial advice, why not take it from the wealthiest man that ever walked the face of the earth?

Better yet, why not take it from the guy who is the wealthiest and the wisest man that ever walked the face of the earth?

According to 1 Kings 3:13-14, God honored Solomon’s prayer request for wisdom by not only giving him that, but also wealth.

So, if we are to take God at His Word, we have to believe that not only was Solomon incredibly wealthy and wise, but also that that wisdom and riches far excelled anyone else that the world had ever seen up to that point — or would see while Solomon was still alive.

As such, he’s perfectly positioned to tell us how to handle our finances.

How Rich Was King Solomon in Today’s Money?

Although it’s nearly impossible to say with any accuracy how wealthy Solomon was in 2021’s dollars, it’s reasonable to assume that his wealth far exceeded anybody living today. Jeff Bezos, Bill Gates, Warren Buffet – these guys are mere paupers compared to the great King of Israel.

According to at least one estimate, Solomon’s net worth could have been more than $2 trillion dollars, or 13 times that of the current world’s richest man, Jeff Bezos. 1 Kings 10:14 helps us with this calculation, stating that Solomon’s annual income was consisted of at least 666 talents of gold. That’s over $1 billion in annual income — just in gold. Never mind the rest of his revenue streams.

What Happened to King Solomon’s Wealth?

Unfortunately, it all went away. Only 200 years removed from Solomon’s death, we see King Jehoash tearing down the walls of Jerusalem and looting the Temple to pay tribute to a foreign king. If the king is resorting to that, it would stand to reason that nearly all of Solomon’s wealth was gone by that point.

This is something he prophesies about, ironically. In Ecclesiastes 2:18-19, he complains,

What Can Proverbs Tell Me About My Money?

Fortunately, despite the fact that Solomon made a ton of money, the Proverbs that he speaks are extremely relatable. Indeed, Solomon’s genius in this book is not that he tell us how to make wise investments, but challenges our very relationship with money in the first place.

Below are five Proverbs that will — if you let it — revolutionize your finances.

Proverbs 16:8 – “Better is a little with righteousness than great income with injustice.”

There are two ways to look at this verse. Either Solomon is saying that the guilt associated with injustice causes us to not enjoy our wealth, or that injustice will cause us to lose that wealth.

Both are probably correct (in their own way), but the fact remains that how we achieve our wealth is just as important to maintaining that wealth.

Think of Lot, for example. Though he was already extraordinarily wealthy, in Genesis 13, he decides to pitch his tents closer to Sodom and Gomorrah to take greater advantage of the natural resources around him.

And yet, where do we find him at the end of the story? Penniless, drunk, and in a cave with his two daughters. He’s lost everything — including his wife who turned into a pillar of salt — because of his decision to settle so close to a place he knew was hedonistic.

Proverbs 13:11 – “Wealth obtained by fraud dwindles, but the one who gathers by labor increases it.”

If you’re anything like me, you’ve probably been hit up a dozen times by an old friend that promises you a “great way to make money!” Usually, this results in some kind of multi-level marketing scheme that involves you recruiting a dozen people, who then recruit a dozen people…kind of like you’re building a pyramid.

Though there are probably MLM’s out there that are perfectly legit, anytime we try to shortchange the process of gaining money by engaging in “get rich schemes,” it’s almost doomed to fail. We can’t not labor for our money; working for it is the only sure way to increase our wealth.

If we try to get it any other way, we’ll either end up wasting our time or losing it all. Neither of which are desirable.

Proverbs 21:17 – “He who loves pleasure will become a poor man, he who loves oil and wine will not become rich.”

The way that Solomon approaches money in Proverbs is interesting. Instead of seeing money as an end unto itself, he sees other things as significantly more satisfying: family, contentment, even the labor itself.

Money, as it is to him, is just a byproduct. To fixate on that is to aim at the wrong bullseye.

But that’s not the way it is for most of us, is it? We take jobs we don’t like because of a 20% bump in pay, we sacrifice precious family time for a promotion that we don’t really even want. All in the name of the almighty dollar.

Matthew 5:3-9 is a treatise on what it means to be a Christian. As you read it, notice that what characterizes a Christian is not necessarily Heaven itself (the reward), but the fruit of that reward: comfort, peace, hope, love, etc.

That’s what we should ultimately keep our eyes on. Heaven is great and is the ultimate goal, but the other things can sustain us in the meantime.

Proverbs 28:27 – “He who gives to the poor will never want, but he who shuts his eyes will have many curses.”

Think of Dorcas. Here was a woman who lived her life, by all accounts, in relative obscurity. And yet when she died, her friends turned out in droves to show what she had done for them in her little corner of the world.

Peter, moved with compassion, raised her from the dead!

On the flipside, you have someone like the Rich Man from the parable in Luke 16 whose life is so meaningless, all it says about him is that he “dined sumptuously” and “wore nice clothes.”

Or the rich young ruler who was so annoyed at Jesus’ commandments to give his wealth to the poor. Why was he mad? Because he was focusing on what he had lost instead of what he was gaining.

How sad are those guys?

Proverbs 23:4 – “Do not weary yourself to gain wealth; cease from your consideration of it.”

Notice that Solomon doesn’t say to “try to think about money less,” he says, “cease from your consideration of it.”

Jesus says the same thing in Luke 12, when He asks why we are so concerned about money and clothes and food and blah blah blah, when God knows we need that. If He’s concerned about it, why should we?

There are other things we engage our mind in besides the zombie-like pursuit of cash, and ultimately, those things are more satisfying and healthier than money anyways. Once we get that through our brain, the world becomes simpler.

And, chances are, our bank account will start showing a positive balance as well.

← Previous Story: Can Daniel’s Eating Habits Teach Us How to Evangelize?
→ Next Story: Is This Our Year of Jubilee?